THIS IS THE PLACE TO PURCHASE THE RISK REWARD CALCULATOR (RRC) SOFTWARE!

You can enlarge this video using the full size button

Get instant readings on your Risk Reward and also what your EXACT trade size should be so that you can maximize your returns and minimize your risk with the
optimum position size every time.

What is Risk Reward & Why You need It

Many Traders & investors use a risk/reward ratio to compare the expected returns of an investment to the amount of risk undertaken to capture these returns. This ratio is calculated mathematically by dividing the amount the trader stands to lose if the price moves in the unexpected direction (the risk) by the amount of profit the trader expects to have made when the position is closed (the reward).

Many traders & investors put way too much emphasis on the winrate and do not understand that a winrate does not tell you anything about the quality of a system or a trader.

You can lose money with a 80% or even with a 90% winrate if your few losers are so big that they wipe out your winners. On the other hand, you can have a profitable system even with a winrate of 50%, 40% or onl 30% if you are good at letting winners run and cutting losses short.

It all comes down to your reward risk ratio!

The reward to risk ratio (RRR, or reward risk ratio) is maybe the most important metric in trading and a trader who understands the RRR can improve his chances of becoming profitable.

The Benefits of Using the "Risk Reward Calculator (RRC)" Software: 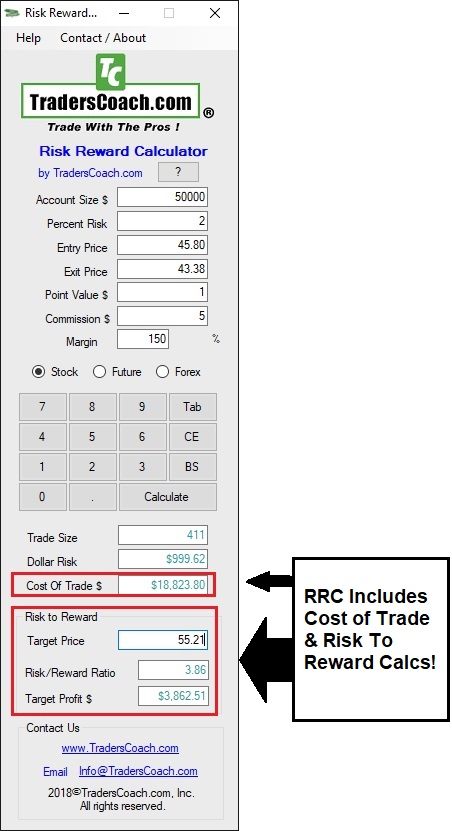 ".... Very nice tool. I can't imagine how anyone trades without using a system like this ... Take care and thanks again for this opportunity."

Bennett A. McDowell, founder of TradersCoach.com®, began his financial career on Wall Street and later became a Registered Securities Broker and Financial Advisor for Prudential Securities and Morgan Stanley.  As a financial advisor, Bennett’s niche was Active Trading and Investing for a community of high net worth clients using his own proprietary trading system.  This system later became known as the Applied Reality Trading®, or the ART®, system.  As part of his overall trading approach, Bennett created the ""Risk Reward Calculator (RRC)"" to calculate the RISK REWARD and implement efficient risk control on each trade.

"Hey Ben, I wanted to again take some time out to sincerely thank you for all you have done for me (and all of your students) over the last four years."

"You are one of the best companies I have ever dealt with. Your products and services are great. God bless you and your family!"

Join us weekly for these interactive training webinars. You'll get answers to your questions in real time during each session.Your trading skills will grow faster than ever as we show you how to use your ""Risk Reward Calculator (RRC)"" software.

I want you to see for yourself how POWERFUL my “Risk Reward Calculator (RRC)” can be for you.

I've been writing best-selling books on trading and investing for a long time. And my students love my live seminars. Now, with the "Risk Reward Calculator (RRC)", you easily implement risk control on every trade!

Why do I give you such value?

If you’re even a little curious about how risk control works, you need to start with your “Risk Reward Calculator (RRC)" today and whether you're new to trading or an experienced trader, this software will give you new insights and edge up on the old traditional way of thinking about risk control.